Established artists mentoring for Trafo.no comment and discuss published works from the TrafoArena upon request for the purpose of constructive feedback and reflection.

The following feedback was given upon request to Trafo-member Rahavi Garthig for her picture “Image (1)”. In her application she asked among other things, for “constructive criticism” and what she “should practice more with”. Mentor comments are not publicly available. The comments by Trafo-Mentor Stella East are published here with her consent and translated from Norwegian.

“Image (1)” of Rahavi Garthig shows a young woman with green eyes, staring out towards the viewer. She is wearing a headscarf with red, white, and black squares. Her face is surrounded with doodle-like-drawings. These drawings possibly represent her hair, or another scarf between the outer garment and her face. The doodles might also connote her thoughts, her inner world, or her identity?

Both her face, her head-wear, and the composition itself is timeless, creating an intriguing ambivalence: Is this a picture from ancient times, or from the present, – is it about women’s politics, or just an image of a beautiful woman? But the picture contains another element; the portrait is drawn from a famous photo of an Afghani refugee girl by Steve McCurry. It graced the cover of “National Geographic” in June 1985; and has been described as “the most recognizable photograph in the world today”.

Without more information from the Trafo member, I am unsure whether this particular content is random. Was the photo used because it is a beautiful face, or is “image (1)” about a certain Afghan woman who has experienced war since childhood? 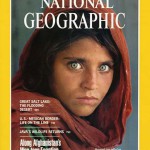 I will now put this content aside, – and discuss the composition:

The image is drawn in both black/white, and gray scale, while the only colour is in the headscarf (red) and her eyes (with a complementary colour green). The effect is very good as her eyes are not just the only green color within the image, but are also in a complementary contrast to the only red colour. The image has three different styles that work surprisingly well together, in part because of their placement within the composition.

For example the background is solid black. It stands in style to the solid coloured graphic and dynamic headscarf. The doodle-like-drawings create a smooth transition between that one style of the headscarf, and the woman’s face, which is formed in a more rendered, realistic style. The patterns surrounding her head, frame the face and eyes in both a decorative and dynamic way.

The result could possibly be even stronger if the Trafo member had used the full potential of a grey scale. (Attached a grey scale with varying shades of grey from 1 -10.) For example within the face of “image (1)” the tone 10, and 1, 2, and 3 are present but not much of the tones 6 – 9. In the original photo by Steve McCurry, the left part of the face is in shadow (tones 3 – 6?), while the right side is in light, – even though this contrast is very subtle. In the photo, the eyelashes and eyebrows are possibly tones 8 – 9, and the upper lip is darker than the lower lip as it catches the light, etc. In the drawing there are white dots in the pupils. This does not match the other forms of lighting, or has this a symbolic meaning? I believe that contact with the reader would become stronger if the pupils were just black as in the photo. Furthermore, in reality, the iris of an eye has the quality of being perfectly round, and with the pupils placed exactly in the middle. The light and eyelids etc. may give the impression of discrepancies, but these qualities are constant. If there is a discrepancy, one should be very careful with how and why one expresses them, otherwise it may seem like the artist made a mistake.

One might also credit the photographer such as: “Drawn with “artistic license” from a photo by Steve McCurry,” National Geographic,” June 1985,” or something similar?

I will conclude by saying that I think the drawing, the composition, and the expression function very well as a whole, and I hope to see more of Rahavi Garthig’s work in the future.

I do hope that my comments are helpful.