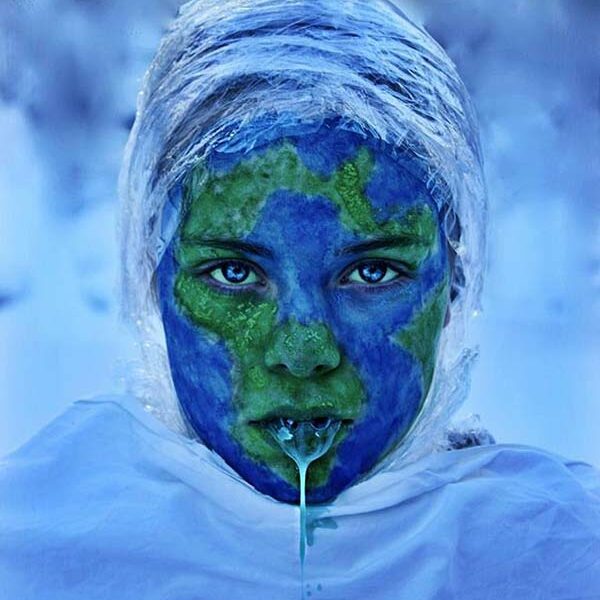 Each month, one work from all the works published that month on the TafoArena, is chosen by a selected mentor. The work is given the title TrafoTalent and a public review.

Read Stella’s review for the TrafoTalent January 2016: Mother Earth. The following is a translation:

“Sooner or later, we will have to recognise that the Earth has rights, too, to live without pollution. What mankind must know is that human beings cannot live without Mother Earth, but the planet can live without humans.”
– Evo Morales

Stella East has chosen Sanna Kalleberg with the work “Mother Earth” as the year’s first Trafotalent i 2016:

Among the many great works that were published in the January TrafoArena, there are several that stand out:

Thea Glad’s minimalist image workspace: a table and a chair, tools and decorations, tells of the joys such an intimate workplace can provide. In its simplicity, workspace beckons the spectator, – such as a bench in a beautiful garden, a freshly made cup of tea/coffee on a kitchen table, or a good book in the corner of a sofa.

Celeste’s delicate image The Thinker, lies somewhere between a naturalistic and a stylized form. The painting is precise, while the qualities of water colour paper is retained.

Furthermore, I was captivated by these four poems: Sebastian N’s: 0:09, Vera Lunde’s: Interactions, Svanhild Amdal Telnes’: Dish Washing, and Harald Olsvik’s: Sludge. Through the use of metaphors, rhythm and subtle surprises the reader is led in and out of various reflections and relationships.

What makes certain creative works stand out and why do some of them communicate personally to me? Often, but not always, ambivalence is the quality that makes me stop and think, and that creates a dialogue in me as spectator. Sometimes, I even think that ambivalence itself can be the core of poesy in pictures, poems, or other works.

For example: Sara Eline’s lovely photo, Day 1, a5, takes us to a forest where the trees are reflected on the water’s surface, or is it a bottomless well, or maybe it is not water at all, – maybe it’s the skies and heavens?

The words to Becky Aberra’s image, Full moon, tells the reader that she is looking at the moon and longing. – But which moon in the image is she looking at? And which moon is she longing for? Is the one moon a mirror image of the other, – or just a shadow?

But the work that I have chosen for the January 2016 TrafoTalent, and which I think is extremely good, is none other than Sanne Kalleberg‘s strong and daring, Mother Earth. With the use of composition, ambivalence, personification, and associations, Sanne Kallenberg tells about pollution and our planet.

In Mother Earth the face of a young woman looks out at the viewer. Her face is painted like the planet Earth. She has clear plastic on her head and undefined white clothes. Liquid comes out of her mouth and soils her clothes. The background is like an “out of focus” winter landscape, or like a landscape seen through frosted glass.

A composition is the grammar of the image that organizes information in such a way that the message can be perceived. The composition of Mother Earth is structured in such a way that the head of the woman is centered in the middle of the picture, and composed of dark and saturated colors. The green shapes within the face, are the image’s warmest colour – warm as forest and grass. Varied light tones of cold blue colours surround the face – cold as death or of winter.

In this way the face is clearly highlighted as the center of the image, and gives the association of a planet floating freely in space.

Despite the fact that the face looks like a planet, there are no recognizable continents. Is this our planet anyway? Or maybe the planet Earth in the future?

Are the crusty lumps in the green forms, mountains on the continents, or wounds in the woman’s skin – or perhaps sores on the planet Earth?

Is her clothing a toga, or bedding from a hospital – meaning; is she a goddess or hospital patient?

We are drawn into her dark, midnight blue eyes, centered in the middle of the image and the world. She looks up at us with a look that condemns us, and not the other way round, – like a child who defies the caregivers who have failed her, – those who should have taken better care of her.

Is the spit or vomit that seeps out of her mouth a sign of her illness? – Or is she spitting at us? – we who have polluted the planet and thus made her sick?

Thank you Sanne Kallenberg that you shared this impressive work with us, that you have given the planet a face and a voice, so that we can “see” that “Sooner or later, we will have to recognize that the Earth has rights, too. .. ”