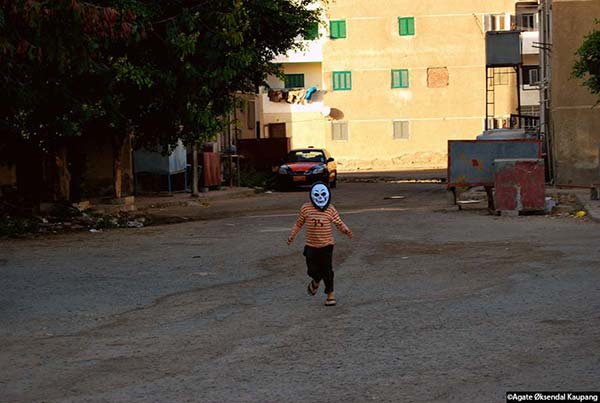 Each month, one work from all the works published that month on the TafoArena, is chosen by a selected mentor. The work is given the title TrafoTalent and a public review.

Read Stella’s review for the TrafoTalent April 2012: The Picture series about Egypt (Bildeserien om Egypt) The following is a translation:

“The best thing I know is to get to meet a new person, or see a new country.”
Agate Øksendal Kaupang

Instead of picking out one single image for the April “TrafoTalent”, I have chosen a series of 10 photographs, “The Picture series from Egypt” by Agate Øksendal Kaupang.

Though all these motives are different, and though at first glance these differences may seem random, they have a convincing relationship to each other.

The contrasts between golden sun and cold shadows, between garbage and greenery, and between ruins and heritage, reveals glimmers of a truth that is not just limited to Egypt.

While the title “The picture Series about Egypt” may create expectations of pyramids or crisis maximized media images, the titles of the individual images, such as “The Brothers”, “The Son”, “Children”, and “The Cat”, create expectations for scenes from everyday life. But Agate will show us another Egypt and another kind of everyday life. Through ambivalence and contrasts, the pictures reveal stories about humanity and about the world, that modern humans share. For example:

“Sea” (”Havet”) – A faded old boat from the past lies on the beach, like an abandoned creature contemplating the many new boats at sea. The old boat lies in the shade with the garbage, while the boats on the lake bathe in the golden light of a sunset / sunrise.

“The Son” (”Sønnen”) – The father is stooped over and busy working in a dark room, in the background of the image. In the foreground of the image, the son stands tall and in the daylight, – but with empty hands. He is possibly ready for the work he is to do? But what work should that be?

“The Place” (”Plassen”) – The beach, where we who view this image stand, is in the shade and speckled with garbage. On the other side of the water lies both the ruins of old buildings, and unfinished modern constructions. They are scattered across a barren landscape bathed in golden light, – like Soria Moria castles?

“The Brothers” (”Brødrene”) – The brotherly relationship between these two men is expressed through their similar hats, similar moustaches, similar skin colour, and that the one brother is holding his arm around the other. Both brothers have their faces turned towards the photographer and thus the viewer of the picture, but as they attempt to avoid contact with the photographer, their eyes go in different directions.

“The Politics” (”Politikken”) – Arranged decorations among the leaves? just garbage? or important information?

“The Cat” (”Katten”) – A dirty cat sits in the shade, between us the viewer – a car, – and rays of sunshine. The cat though, chooses to turn away from the sun and the car and look at us, while we / the viewer choose to gaze back to the cat.

“Spirituality” (”Åndeligheten”) – A beautiful building catches the golden sunlight on its walls, while all the clutter and random stuff around the building lies in the shade. 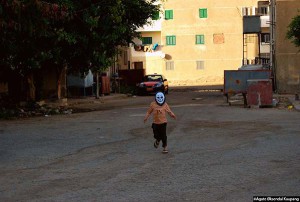 “Play / Seriousness” (”lek/alvor”)- A child runs toward us / the viewer of the picture, with a smile. The smile though is from a death-mask that the child is wearing. The white colour of the skull in the mask lights up in the shade. The child and the mask is the center-of-attention on a surrounded barren island of asphalt, with debris on both sides, with the viewer in front of him or her, and with a sunny wall behind. Despite the fact that the wall is a little worn and missing a window, it’s still someone’s home, and maybe the child’s home as he / she runs away from it, towards us. Despite the asphalt and debris there is a tree. Despite the fact that the child is in the shade, the sun is shining behind him / her. Despite the smile, the smile is a death-mask. But then the child is just playing?

Thank you Agate for sharing this glimpse of the world with us.